This is a visit to a very special fancier, one who has been at the very top of our sport for nearly sixty years. There can be very few fanciers with the experience and few as successful as J.J.Adams, affectionately known as Boeta Koos. From the age of 22yrs. he’s been involved with pigeons and since he started racing in 1948 this grand old man of pigeon racing has never skipped a season of actively racing his birds.

JJ Adams in front of his loft

As a beginner he started plying his trade as racing pigeon fancier in the then Oakdale Homing Society. In reminiscing about those far-off years I clearly felt the immense pride and fullfillment he derived from racing his birds against the likes of Pa Consul, Charlie Davids, Sakkie Pietersen and Paul Morris, tough and experienced fanciers who ruled the roost during those years.

During 1951-52 the club Oakdale Homing Society disbanded due to the “Group Areas Act”. This cruel and loathsome law was devised and forced onto people in order to force them off their properties bringing an end to an era of what would have been one of the oldest clubs in the Federated Board of Homing Unions. Members were forced to join clubs elsewhere or just stopped racing .For J.J. Aams it wasn’t the end and he became a member of Bellville South Pigeon Club of which he is still a participating member and later on served as chairman for many years, guiding it to one of the best clubs in the Federated Board of Homing Unions.

In those years there was no clubhouse and meetings were held in the homes of club members. Basketing nights pigeons were taken to Cape Town station and transported by rail to the various liberation points. Week after week Boeta Koos would make it his mission to accompany the birds and help load them onto the train. During the 1950’s the Northern Suburban Homing Union to which the club belonged decided to build a shed in Bellville South. In due course J.J. Adams along with fellow fanciers succeeded in erecting the structure which for many years served as basketing venue. It was during this time that the Federated Board of Homing Unions put out a request to all of it’s affiliate unions for financial assistance in order to purchase it’s own transporter. As the union wasn’t in a position to assist financially, a call went out to its members for help. Realising the need of an own truck together with the benefits thereof for his beloved sport, Boeta Koos together with Ben Van Rooyen, no longer with us anymore, put their homes up as security for this purpose. In so doing J.J. Adams contributed enormously to the success of pigeon racing in the Federated Board with its twelve affiliate unions. As if that wasn’t enough for this passionate pigeon fancier he availed himself as chairman of the Northern Suburban Homing Union during his later years, a position served with distinction and honour for quite a few years. As is usual for this amazing man it is not the end yet as he’s currently the President and Ring Steward of the Federated Board. A task which he performs with such pride and fervour that it will put many far younger than himself to shame.

BIRDS.
I can carry on writing about Boeta Koos and his sacrifices for this sport he loves so much but for now lets turn our attention to his pigeons. As is to be expected at his age and being in the sport for so long it’s difficult to bring to memory all his triumphs in races and the birds that contributed to the loft’s success in years gone by. It’s apparent that he was a fierce competitor from the onset and through the years had many top positions at all levels of competition. A builder by trade, then during his working days he befriended another fancier J. Klussman ,still racing with him in the same union today, who gifted him a few birds amongst which was a Gurney hen that won him countless races but eventually was lost on a tough board race.

Young birds ready for the 2009 season

His present day family is based on birds obtained from the late Tommy West, a top notch fancier of yester year, called the Billy Pearsons. The success of the loft is built around three cocks from this bloodline which won him the Three Bird Championship, Kroonstad and Kimberley in his Federation. The offspring of these magnificent pigeons is keeping J.J. Adams at the top of the score board year after year.

DAY TO DAY CARE.
First and foremost, he believes that in order to achieve top results in racing, fanciers should put shoulder to the wheel 365 days a year, the moulting season being the most important period on the racing calendar. Anything overlooked or neglected during this part of the season will come back and bite you later on as has happened to numerous fanciers throughout the history of the sport. As far as dedication is concerned I’ve never seen someone as purposeful and enthusiastic as 80yr. old Boeta Koos. Winter or summer eight o’ clock every morning you will find him cleaning out his loft and tending to the needs of his racers as well as his stock birds. Come racing season and birds must be trained he’ll be in the loft at five in the morning basketing them for tosses three to four times per week. As far as feeding goes nothing fancy but a good commercial mix , keeping in mind the weight of his athletes. This aspect is of cardinal importance during racing season as excess weight hampers birds in delivering top performances when needed. When it comes to the health of his flock no stone is left unturned, every treatment is done precisely as prescribed and is done before racing and before the moulting season as health during the moult enhances a perfect transition into this part of the season.

RACE PERFORMANCES
To go into detail on this subject of J.J. Adams’s history is such a monumental task that I’ve decided to sketch but a small portion of this highly competitive and shrewd competitor. In doing this I hope that I’ll succeed in giving you a glimpse into the past of a master in the art of pigeon racing. Upon embarking on this assignment little did I know of what was awaiting me. When I asked him to give me a glimpse into results past and present he just looked at me, went out of the room to come back with a massive stack of certificates that made me shrunk back into my chair, thinking, what have I let myself into. As I browsed through this archive of results he talked about races won ages ago that he still remembers as clear as day light. His eyes lit up when recalling certain Federation wins or clocking a bird that he prepared for a certain race carrying all the pools. Then a moment of silence, I looked up wondering what was wrong. He said, you know what, in all my years of racing I’ve never won a Board race. During all that time he clocked second in ten Board races, top fifty placings in every Combine on the card, Federation and club wins that any other fancier could only dream of. For a man that has won everything there is to be won and still ponders about that elusive Board win just tells you a little about the degree of competitiveness of this giant in pigeon racing. 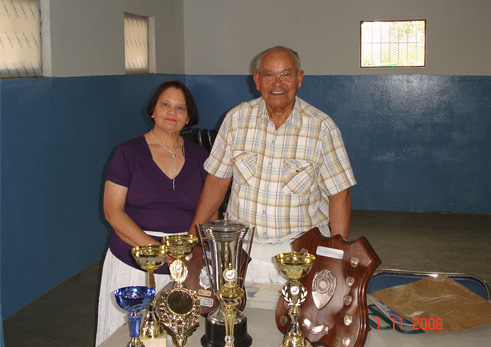 J.J.Adams was so dominant during the latter part of the 60’s and in the 70’s that a reporter W.Klopper from the then “RACING PIGEON MAGAZINE” came down from Johannesburg in 1973 to do an article on his phenomenal success during that period. As stated in the magazine that from 1968 to 1972 he topped his Union averages with five federation and ten club wins in 72 alone, to round off a series of unbelievable victories unparalleled in the annals of the Federated Board of Homing Unions. In conclusion I’ll give you the results of the 2008 season of this man and his birds and also ask you to imagine what it must have been like racing against him during his prime. In a season of 23 races J.J. Adams scored in club, federation and board races as follows; Club 7 x 1’st. 4x2nd. 5x3rd. 1x4th. 4x5th. 4x6th. 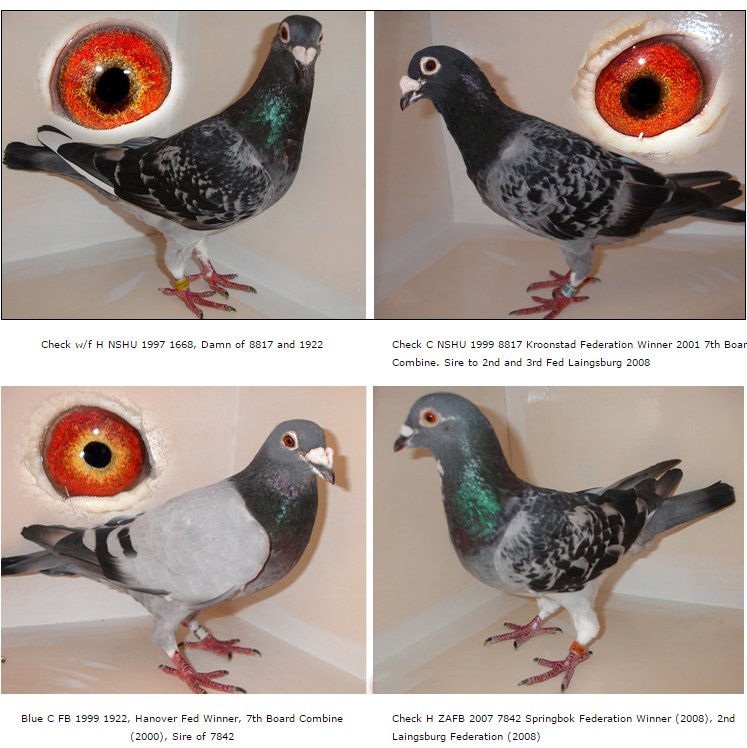 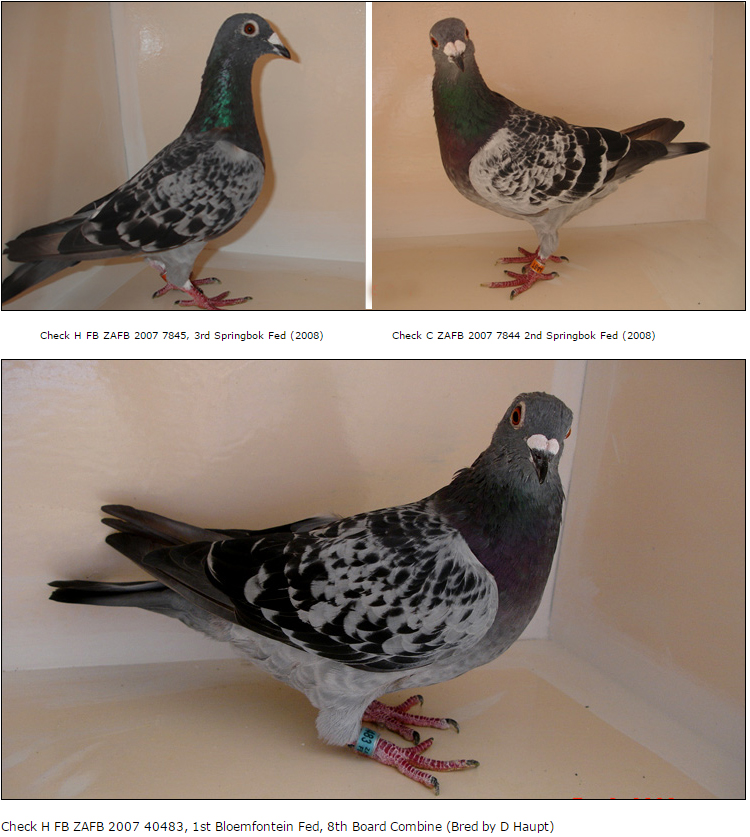 Lastly I asked this amazing man who contributed so much in promoting the sport of pigeon racing in his community what he thinks the future holds. Quite frankly he responded that the younger generation should give more of themselves in order for the sport to survive. We here at Western Cape Pigeon Racing salute you Boeta Koos, not only for what you’ve accomplished in your illustrious career but for the example you set in giving so much of yourself in promoting this wonderful pastime in these times of doom and gloom.