Well 2016 will be remembered in WDHU as “The Year of Fahiem Samuels”. Wow, what a phenomenal season he had from beginning to end.

I visited the loft of our Champion to go and see for myself the birds that thrashed WDHU this year and to try to learn a few secrets to the success of Fahiem Samuels.

LOFT:
The loft is a quarter section of the old loft of the Late James Clark which Yusie Adams bought and then offered Fahiem a part of. He has retained Mr Clark’s idea of putting the water outside the loft in a box attached to loft – thereby being able to change or remove the water without actually going into the loft.

Fahiem likes an airy loft with lots of air playing through. In fact he has installed a massive turbine at the back of his loft, with manual speed control, to extract all the bad air. It is highly effective and he demonstrated to me how you can actually feel the “pull” when he puts it on full blast. It is particularly useful for removing all dust when he cleans the loft. As an electrician by profession, there is evidence all over the loft of how he has employed his skills to make his life and the life of his birds easier. The electronic clock with electricity backup, the lighting, temperature monitoring with a massive digital thermometer – these all run on permanent power provided to the loft.

The loft is unusually very deep and this is why he keeps the front door open as often as possible so that the air can play through the loft, especially on hot days. He believes that 24 degrees celsius is the perfect loft temperature. It can drop to 18 or 19 degrees celsius at night but that is still good. He also believes that the double layered asbestos roof helps to increase the insulation of the loft against hot or cold. 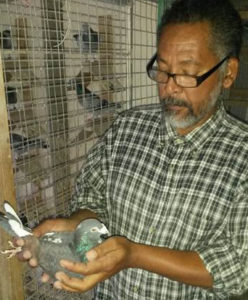 THE STOCK BIRDS
He has kept the same birds for many years now already and most of these birds were obtained from Yusie Adams (Belgravia Lofts) over the years. It is clear to me that he has built up a family of pigeons because every bird in the race loft looks alike and holds the same unique and small head. These are 90% Janssen with the old bloodline of Stichelbaut Janssen and the old Lambrechts line from Sias
Snyman. His foundation cock over the years has been this dark check pied (see photo) – a Van Rhijn- Kloeck bird of Manie Combrink. It has bred most of the champions in his loft when mated with the old Janssen line and the offspring have proven themselves over all distances. He brought in some Gaby Vandenabeele and Van loon birds 2 years ago and they have complimented the existing bloodlines Foundation Cock in his loft very well.

Last season he introduced a Red Cock (he does not have a pedigree but thinks it may be Janssen Hollander) which he bought from Shamiel Salie and this introduction brought immediate and considerable success. Shamiel obtained the Red Cock as a baby from Sharief Karriem and it won 2 club races scoring high in the WDHU federation on both occasions. Fahiem always liked the Red Cock but Shamiel was not prepared to sell it until last year when he called Fahiem and offered it for sale together with a daughter. This season brought immediate success with the Red Cock and now he will breed around it a lot more this year.

A FEW METHODS
The birds look extremely healthy and there is lots of down feathers laying in the loft. He attributes the good health of the birds to his habit of giving Apple Cider Vinegar 3 times a week throughout the year. He explained that it controls fats and acids levels and keeps weight perfect.

He likes double ups and triple ups. Only circles his team in the week once a day in the morning. They stay indoors on weekends. Doesn’t even toss them on a Saturday but rather keeps them in the loft. When the other birds come from the race they all stay in the loft until Monday morning when they are released to play around.

Only on Tuesday morning do they go up to circle. One Paarl toss on a weekday and then they are ready to be doubled up because he would not have taken too much out of them during the week. 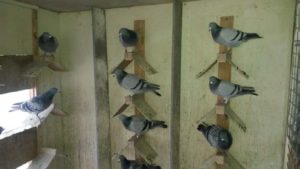 THE RACE BIRDS
He prefers to race hens – there will always be more hens than cocks in his race team because he feels cocks tend to misbehave and bring down a well circling pack. He attributes 90% of his results to hens and will just keep a few cocks around to motivate the hens but not much. Those few cocks must perform though and if they don’t perform or if they misbehave and give him trouble then he will get rid of them.

He does not like to overcrowd his loft and believes that a team of about 55 to 60 is ideal for his loft. He does not breed with the race birds; especially not yearlings.

He will fly yearlings very sparingly in their first year (4 or 5 races at most) and find they then perform well in their second year. This is a strategic move not to destroy them as babies and it worked very well this year. Last year 20 of the 2 year old hens who done so well this year never flew much as babies. He brought them out late and only flew the last 5 to 8 weeks with them – then automatically the year was done. As a man who always does well in the distance he decided that in 2016 he would target the short to middle distance races because he realised that there are only 4 long distance races whereas there are 18 short to middle distance races. He even adapted his breeding and never bred the specific long distance birds that he normally does because he wanted to challenge himself to see if he can fly from beginning to end. The rest as they say is HISTORY.