They say time flies when you are having fun and in the blink of an eye 18 races have passed. The Western Cape is currently in the grips of the worst drought in decades, yet ironically the races have been wet and windy. So what can we say about it and how has it treated our fanciers thus far ………. in the old days there was a saying that “what you put in is what you get out” in reference to the hard work required to reach success. As things have changed and developed over the years, with advances in medication and genetics, there has been a growing shift towards the thinking that “good birds make it easy” and “having the right muti is key”. Whatever the thinking, balance will always be important and finding the right balance will always be the challenge. It is what makes this sport so interesting and filled with wonder. When it comes to our feathered friends it is often the case that what works well for one, won’t necessarily work well for another. There are many roads that lead to success but one thing is undeniable ….. the “road” will always deliver the final judgement. 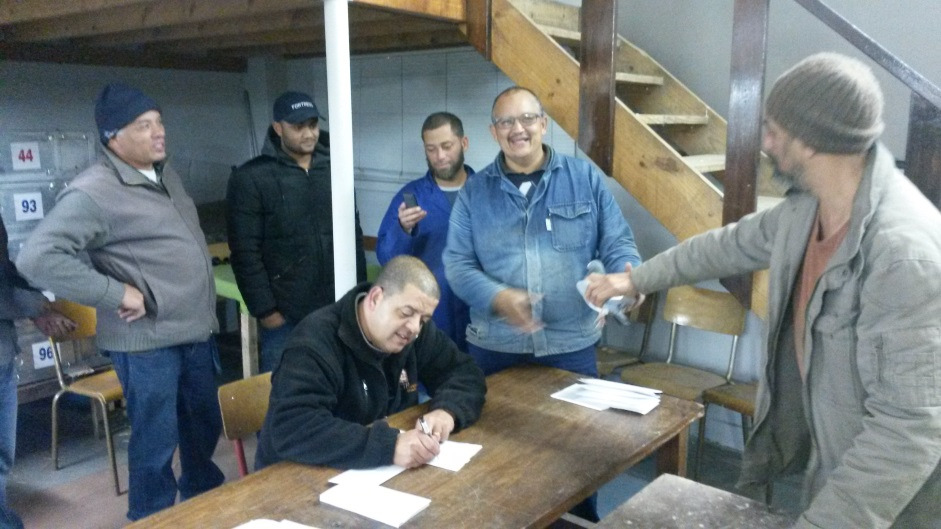 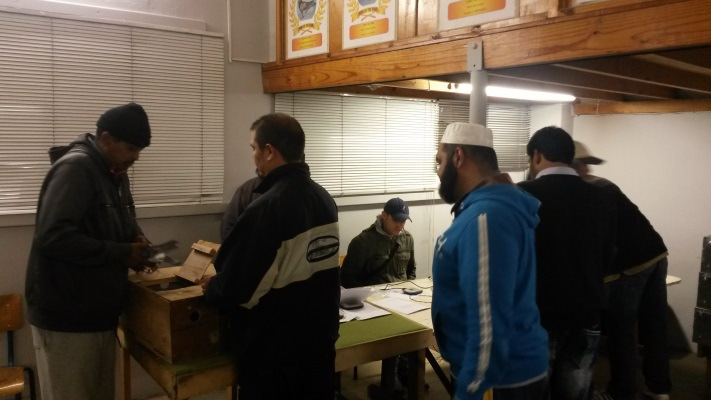 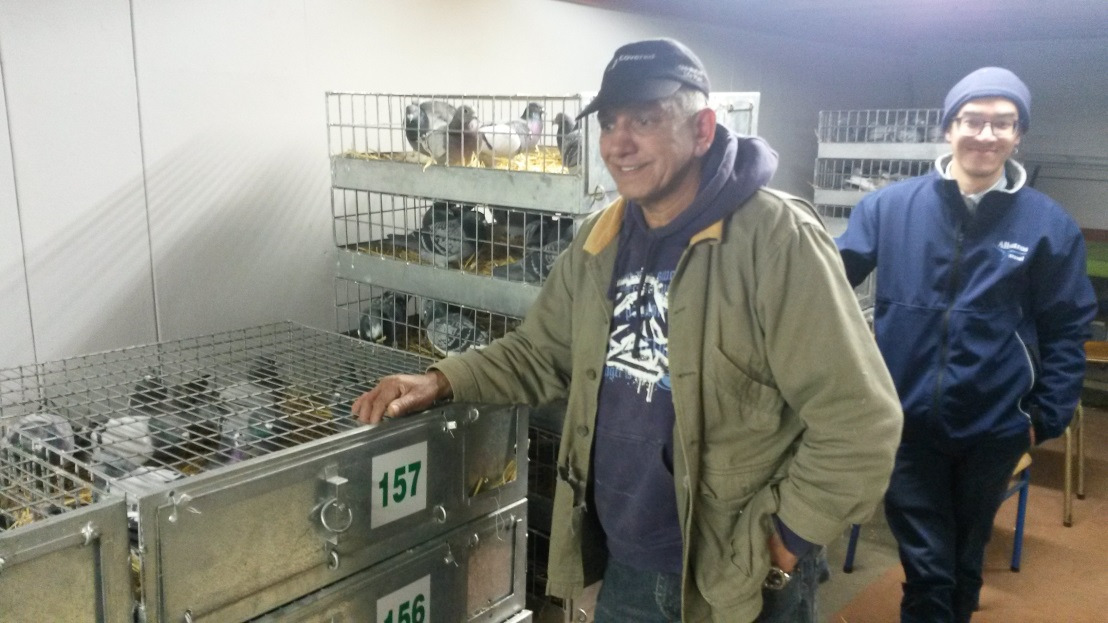 So as for each new racing season which brings much hope and expectation for all fanciers in this wonderful sport, so it has and will be true for the 2017 WDHU season that the “road” will deliver the verdict. For some the hopes and expectations will be met or exceeded, while for others it may be a case of going back to the drawing board and trying to figure out better ways to meet the challenge. It was with great excitement that WDHU fanciers embarked upon the 2017 season. In addition to the passing of our longstanding Champion Leslie Blake during the 2016 season, we had lost quite a few fanciers during the off-season too, most notably our 2016 Champion. Fortunately we were able to acquire a few new fanciers so that we could start the season 40 strong.

The partnership of Karriem & Jacobs is not new to WDHU, but certainly this year they have started the season with a gusto which we have not experienced from them in recent years. In each of the first 6 races they have placed multiple birds in our federation result. They are our 2017 Short Distance Champions by a street mile and have a very healthy lead in the overall Union Championship Points too. In fact they are currently in 11th position on the overall truck points. An excellent achievement and we are extremely proud of them for flying our WDHU flag so well at that level.

WDHU has a proud track record of winning Combines but sadly we have not achieved that honour this year yet and our performances at that level have been below expectation. One of our new fanciers is Aubrey De Wet. He has brought his unique brand of positivity into our Union and has a good track record at winning Combines too, so we are certainly hopeful that he will bring that honour to WDHU at some stage. Aubrey subscribes strongly to quality over quantity and despite racing only 11 birds over the first 6 races he has managed to do very well and is currently in 21st position in the SWPC Combine.

Certainly the races have been won with lower average velocities than we are accustomed to at this stage of the season. While this may be thought to suit some better than others according to the age old debate of wind direction and loft position, there appears to be such a spirit of good sportsmanship that prevails in WDHU that the debate is never entered into or entertained, but rather the winning bird on any day is acknowledged as the best bird on that day regardless of anything else. 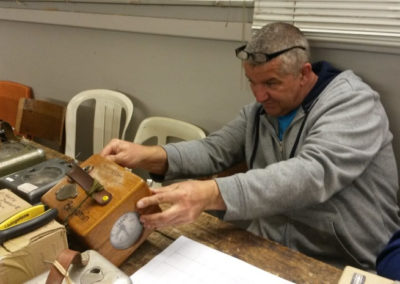 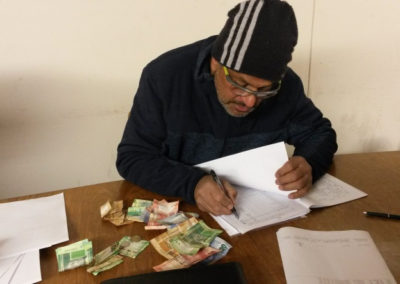 WDHU Treasury Nazeem Marlie is all concentration as he attends to the very serious business of counting the money, balancing the books and ensuring that WDHU finance matters are well taken care of. 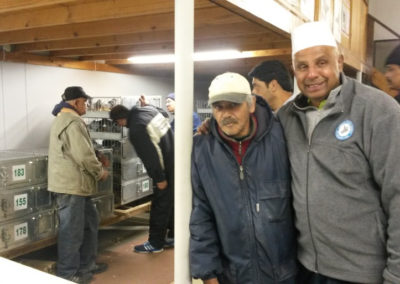 WDHU Chairman Clive Fortuin and new FBHU Chairman Riyaad Najaar share a lighter moment in between the serious business of basketing pigeons. These 2 have been friends for many years and were founder members of WDHU. Through their vision and foresight we have all reaped the benefits of the good foundations they have laid for us.

We would like to think that we are really a very pleasant union with professional standards and a drive to innovate and promote our sport within our community so that we may grow from strength to strength. While we have some fanciers in our union who are better off financially, the majority of our members are either pensioners or ordinary working men who are battling just to make ends meet and support their families. Our sport has become very expensive and money certainly talks in the sense that it increasingly determines to which lofts the best birds go, who has access to the best resources and equipment, and ultimately who is able to perform consistently to the highest standards. What many of our members may lack in finances, however, they make up for in enthusiasm, commitment, innovation and sportmanship. Therefore it is sad to admit that our membership is now under real threat from the rising costs of participating which has seen quite a few members indicate that they simply can no longer afford the huge increases. We remain hopeful that a workable solution will be found and will be actively pursuing fundraising opportunities wherever possible. We appeal to anyone who is willing and able toassist us in raising funds to let us know so that we can make arrangements to assist our members. 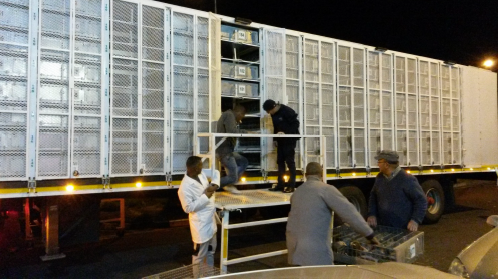 Above: Loading our pigeons onto the new WCPTA trailer.